Bartimaeus 1: The Amulet of Samarkand

LoveReading View on Bartimaeus 1: The Amulet of Samarkand

This is the first in an unforgettable fantasy sequence called Bartimaeus, every one of which is full of magical intrigue, murder and rebellion.  When Bartimaeus is packed off against his will by Nathaniel, a young magician’s apprentice to steal the powerful Amulet of Samarkand from Simon Lovelace, a master magician of unrivalled ruthlessness and ambition little does he realise the ramifications of it.   Set in a modern-day London controlled by magicians, this hilarious, electrifying thriller will enthral readers of all ages.  Stroud’s disparate collection of characters are brilliantly drawn and their actions utterly compelling as you are drawn into this incredible story.  The second in the Bartimaeus sequence is The Golem’s Eye and the third is Ptolemy’s Gate.  The fourth one, The Ring of Solomon is recently published and is a spell-binding addition to Bartimaeus sequence.

Bartimaeus 1: The Amulet of Samarkand Synopsis

Bartimaeus 1: The Amulet of Samarkand by Jonathan Stroud 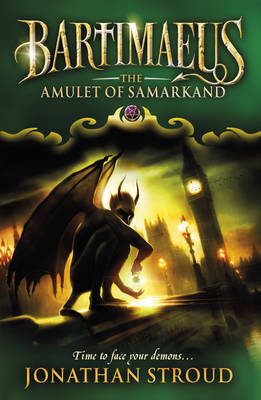