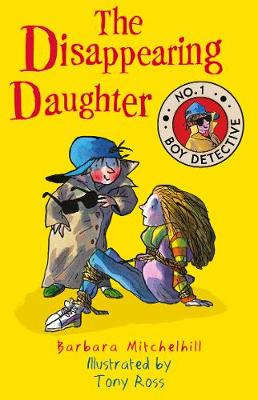 In a nutshell: comic triumphs and mishaps of school boy super-sleuth

Damian Drooth’s life changes when he comes across a book called A Hundred Ways to Catch a Criminal.  Overnight he is transformed from – in his words – ‘bored brat’ and ‘droopy drop-out’ to school boy super-sleuth. His first attempts at crime solving are not entirely successful to put it mildly, but then he gets the chance to lend the police a hand in a real life kidnapping. The mix of perfectly observed ordinary boy behaviour (a la Horrid Henry) and zany far-fetched adventure make these stories hugely satisfying and enjoyable. Packed full of illustrations by Tony Ross they’re great for children happy to read on their own, but read aloud wonderfully too: adults will find much to amuse them in Damian’s wry comments and moments of self-awareness. Great fun!  ~ Andrea Reece

Damian Drooth, the one of a kind, clean-up-the world hero, has arrived. Criminals beware - and be very afraid! In his first case, Damian finds himself in the glamorous world of filmmaking. But it turns out to be a den of deceit. Damian needs all his mind-boggling skills to keep himself out of trouble and to rescue Trixibelle, the daughter of a crazy, mega-rich director.

Packed with rib-tickling pictures from Tony Ross, this is perfect for newly confident young readers of 6 and up!

Barbara Mitchelhill was born in Rochdale and trained as a teacher. While she was teaching, she began writing for BBC children's TV and went on to write for educational publishers, before writing novels for children. She makes school visits all over the country, and enjoys appearing at literary festivals and talking to teachers and librarians, some as far away as the Caribbean. Her hobbies include reading, theatre, music, gardening and walking her border terrier, Ella. She lives in Staffordshire and has two grown-up daughters and four grandchildren.

More About Barbara Mitchelhill
Add To Wishlist
Buy from our bookstore and 25% of the cover price will be given to a school of your choice to buy more books.

Eddie Albert and the Amazing Animal Gang: The Amsterdam Adventure

How I Became a Dog Called Midnight